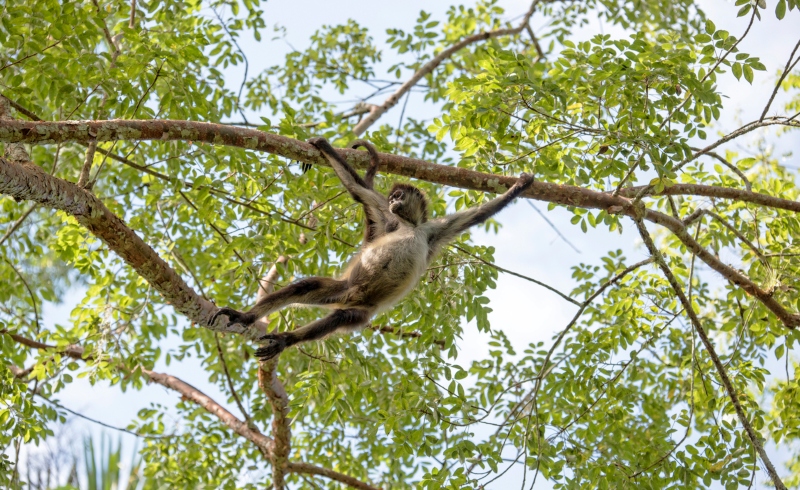 Scientists in Brazil believe that global warming and climate change have created conditions that favour the reproduction of the mosquitoes that transmit viruses such as yellow fever, now spreading through previously immune regions of Brazil.

The Intergovernmental Panel on Climate Change suggests that an increase of 4°C in mean annual temperatures is possible in these south and central regions because of warming caused by carbon dioxide concentrations.

The yellow fever virus can be transmitted to humans and to monkeys, and thousands of monkeys − some from endangered species − have died in the last four months.

Most of the deaths have been caused by the virus, but some monkeys have been shot or clubbed to death by Brazilians who erroneously believe that they, and not the mosquitoes, are responsible for transmitting the virus to humans.

The woolly spider monkey (muriqui), and the brown howler monkey (bugio) are the species most affected.

Sérgio Lucena, a primatologist and zoology professor at the Federal University of Espírito Santo, says that, in fact, monkeys are sentinels because they die before humans. “If the virus begins to propagate in a determined area, the death of monkeys sends us a warning.”

Since January, the yellow fever virus has claimed nearly 2,000 human victims, 300 of them fatal, in a region of Brazil where it had been eliminated in the 1940s.

The epidemic began in the state of Minas Gerais last December, and since then it has spread to the neighbouring states of Espirito Santo, Rio, São Paulo and Bahia. Vaccination campaigns are now under way.

The virus, which is transmitted by the haemagogus mosquito, is normally confined to the tropical regions in the north of Brazil.

José Cássio de Moraes, an epidemiologist at the Santa Casa hospital in São Paulo, says that intense deforestation, the chaotic urbanisation of rural areas and climate change have worked together to encourage the spread of viruses such as yellow fever − not only in Brazil, but in many other countries.

“Changes in ecosystems, global warming, intense rains, heat – all this facilitates the spread of disease by vectors [disease transmitters].”

“When the trees are destroyed and another primate,
the human being, appears, this haemogogus
mosquito will substitute the man for the monkey”

So far, the cases in the southeast region of Brazil have occurred in rural areas with woods and forests. But officials are worried because many of these areas are not far from major urban centres such as Rio de Janeiro and São Paulo.

Tens of millions of people live in these areas, where the city-dwelling aedes aegypti mosquitoes could start the spread of the disease in a human-to-human cycle, according to Dr Anthony Fauci, director of the National Institute of Allergy and Infectious Diseases.

These mosquitoes are already responsible for the transmission of the dengue, Zika and chikungunya viruses, which have claimed thousands of victims in Brazil in the last few years.

Although there is a highly effective vaccine for yellow fever, it is not routinely given in the major urban centres.

Sérgio Lucena is one of a group of scientists in Brazil who have begun to study the relationship between the present epidemic and the degradation of the environment.

He explains: “Monkeys live in the canopies of the trees. The cycle is restricted to there. But when the trees are destroyed and another primate, the human being, appears, this haemogogus mosquito will substitute the man for the monkey.”

Over the years, deforestation has left different species of monkey surviving in very small fragments of forest, and Lucena says: “Impoverished ecological systems can favour the growth of mosquito populations.”

When virus-carrying mosquitoes find large populations of monkeys in isolated areas of the Atlantic Forest − which once covered the entire eastern coastline of Brazil, but is now reduced to under 10% of its original size − they thrive. And when there are no more monkeys to infect, they turn to other victims – humans.

Deforestation also impoverishes the surviving forest. Where there is plenty of fruit and shade, without pollution, the monkeys are healthier, stress-free, with a more efficient immune system, and better able to resist viruses.

Dr Moraes warns that if the continuing worldwide urban expansion into rural areas is not controlled, the changes could bring not only an increase in cases of yellow fever but also of other diseases transmitted by vectors, such as leishmaniasis and malaria. – Climate News Network

Previously published on climatenewsnetwork.net and is republished here under a Creative Commons license.
—

If you believe in the work we are doing here at The Good Men Project and want to join our calls on a regular basis, please join us as a Premium Member, today.

All Premium Members get to view The Good Men Project with NO ADS.

Need more info? A complete list of benefits is here.