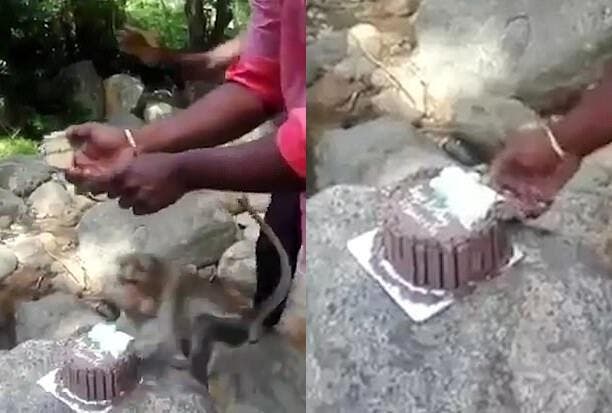 This is the hilarious moment a monkey steals an entire birthday cake from under the noses of a celebrating family.

The daring monkey pounced just after a member of the family had cut a slice of the cake while relatives sang Happy Birthday.

In the video, which was filmed in India, the family can be heard singing before the monkey sneaks up to them, steals the cake and then runs with it up a tree.

The video first emerged in December last year but was re-posted on Twitter on Thursday.

The footage begins with the sound of a woman singing happy birthday as a man in front of her cuts into the chocolate cake.

Just as he begins to pick the slice up, the monkey looms into view and grabs the cake with both hands.

It also bites into it and carries it away as members of the family scream out in shock.

The monkey then clambers quickly up a nearby tree, prompting one person below to start laughing hysterically.

Since being re-posted earlier today, the video has garnered more than 1,800 likes and 300 retweets on Twitter.

This article has been adapted from its original source.