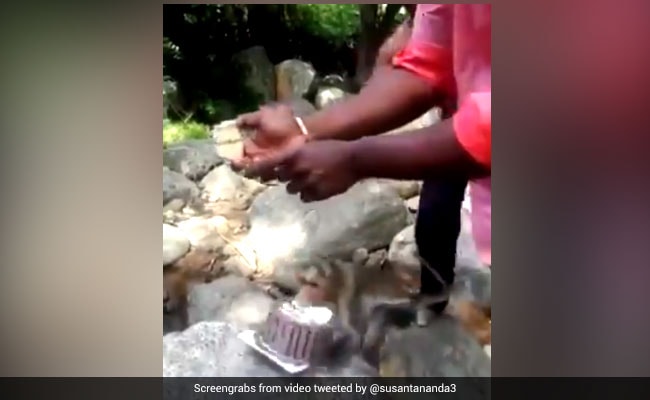 This monkey was filmed running away with a cake, leaving spectators open-mouthed.

This monkey pulled off a robbery that would put Money Heist to shame. A side-splitting video that emerged last year has captured the Internet’s attention yet again, leaving thousands in splits. The video shows a monkey interrupting a celebration to make off with the most important part – the cake.

The video, which was shared on Twitter this evening by Indian Forest Service officer Susanta Nanda, shows some people celebrating in a forested area. One man in the video was filmed cutting a cake kept on a boulder. However, their celebrations were cut short by a thieving monkey who waited for the perfect opportunity before running off with the cake.

No soon had the man cut a slice of the cake that the monkey appeared at the scene, grabbed the cake and ran away with it. The whole heist occurred in the blink of an eye and ended with the mischievous monkey running up a tree, far from the shocked people who could do nothing more than stare.

“Celebrating wedding anniversary in a forest is an experience altogether,” wrote Mr Nanda while sharing the video. “Surprises guaranteed.”

Watch the hilarious cake robbery below:

Celebrating wedding anniversary in Forest is an experience altogether….

The video has collected over 11,000 views and a ton of amused comments since being shared online.

“A cultured monkey….waited for the ceremonial piece to be cut out before executing the heist!” quipped one person in the comments section.

This is not the only monkey video that has left social media users amused recently. Just a few days ago, Mr Nanda also shared a video of a monkey fashioning a face mask out of an old piece of cloth that had people in stitches.